It’s been two years now since I wrote this post, talking about the fact that I have Chronic Daily Headaches and Chronic Migraines. I wrote one update a few months later, and I’ve mentioned them in many other posts, but I haven’t posted any more updates, simply because. . . well, we still haven’t figured it out. But it’s been two years since I started talking about it, and I think it’s time for a checkup.

From my first post: “Doctor: Last resort. Whenever I think about going to the doctor I start thinking about the song, ‘The Point of No Return’. If nothing on the list above works, we’ll go to the doctor. But the Doc is my last resort. The experiences we’ve had with doctors in our area tend to be all about finding ‘the right drug’ for you; not the cause. We want to figure out what’s the matter with me and eliminate it–not just treat the pain, as wonderful as treating the pain sounds.”

Ha! It sounds so funny to me now. Over the past 2 years now we’ve been to 5 different doctors. Not including chiropractors, physical therapists, acupuncturists, etc, etc.

At first I kept a draft post and was writing down everything we were trying–diets, doctors, blood tests, therapies. . . but then I got tired of thinking about it, I didn’t want to take the pills or eat the liver, much less write about them, and then I took a blogging hiatus over the summer, and now that I’m back I’ve realized I need to write an update, just to remember everything we’ve tried! After going to the 5th doctor a couple months ago I realized I need to keep a book and write down everything we’ve tried, because the list has gotten long enough that I’ve started forgetting things–not good when the doc asks what we’ve tried and we forget a, b, c, or d!

But this is not going to be another list post. One is coming, but this is simply an update (a long, rambling one at that), since I realized it’s been 2 years today since I started actually talking about it.

I move into the dorms at college today. We’re packing up and about to drive the 40 minutes away to unpack all the fun things like pencils and bed sheets and coffee. I’ve been wondering for the last few months how this will change my health, but I’m trying not to worry–after all, the last 10 months have been nothing but change, so what’s a few more changes? And if the distraction, classes, theatre, and living in the same town as my new nephew helps, then thank God! If not, I’ll have a little more to learn during college than just the classes.

The last 10 months have been all change. The 5 years before that were pretty continuous. I had a pattern, I could say “it’s migraine week, but there are only a few days left, then it’ll be back to my normal headaches and I can function again for 3-4 weeks until another migraine week comes”. I felt blessed that even through the pain, I knew I had some saving graces–I slept well, I didn’t have added trouble dealing with anxiety or depression, at least it was just the couple things that I had to deal with, not a whole slew of symptoms on top of that. Ha! Well. . . not so much anymore.

. . . Aaand the compression stockings are back! It’s been too hot to wear them for quite awhile, but migraine week made them necessary again, and I’d forgotten how much I love them. #chroniclife . . . . . #compressionstockings #life #live #living #compression #feet #barefeet #barefoot #outside #summer #hot #chronicillness #chronicpain #chronic #pots #dysautonomia #awareness #bloodflow #heart #heartrate #bloodpressure #spoonie #spooniestrong #Nebraska #spoonieproblems #health #doctor

10 months ago I was at a friend’s wedding, sitting in a hot barn, and suddenly felt very, very nauseated. I started praying that I would get through the ceremony without having to leave–it was hot, and when we stood I got terribly dizzy, and had to hold on to Dad’s arm. On the way there I had been getting carsick while I was reading–strange, since I never got carsick before, even while reading on very winding roads–and I thought hopefully it’s just the carsickness, I’m not getting sick. I had been getting a migraine earlier that day, but it wasn’t bad enough to make me stay home from the wedding–but as this happened, I was wishing I had.

It wasn’t the carsickness, it was my new life starting. All of a sudden, it wasn’t just the headaches anymore, it was dizziness every time I stood up, nausea if I wasn’t very careful about what and when I ate, easily getting carsick, and no more sleeping soundly through the night. All of a sudden, I had to find new strategies to deal with this–I had to figure out how to live my life as it was now, instead of as it had been. And for a while, I became a hermit.

That’s what I tend to do when I’m dealing with something hard–little introvert me, I become a hermit, don’t go out unless I have to, and try and deal with everything myself, hoping to make it easier for those who have to live with me, I try to find out what helps, and eventually, figure out how to have a life again. I think that’s what this summer was for. Figuring out how to have a life again.

And I think I’ve finally done it. I know how to manage the new symptoms, as well as the old ones, and I’m living my best life while I do it. I move to college today, I’m rooming with my cousin (and very excited about it!), I am taking classes full time (although starting out with minimum hours–I’m not completely crazy!), and I have all my little ways to keep the nausea/dizziness/etc. under control, plus we’re still looking for a cure–or at least the cause. So all in all, things are actually really good.

Crazy, isn’t it? I do have days where I feel like life really sucks, and I don’t want to have to deal with this anymore (this week has been filled with them, unfortunately Lots of migraines. But that’s past now), but I can see the blessings that have come out of this situation, and how much it’s helped–made–me grow. I’m so much stronger through all of this. I know my limits, even as they change day to day, and I use the good days much smarter than I would if they weren’t so few. I’m blessed that it’s not worse, that we still have things I haven’t tried, and that I haven’t had many side effects from what we have tried. I’m moving to a little town where I have lots of family, so I’m already just 40 minutes from home, plus I have aunts, uncles, cousins, my sister, her family, and friends all around if I need help, someone to talk to, push me to do more when I just want to become a hermit again or help me to see the good things on bad days, or just a place to get away from school–I have a wonderful support system, both here and there. And I’m so excited to start this new journey, even as we continue to try and figure out the illness that comes with me. 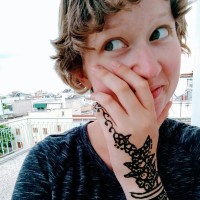